2019: Where do foreigners buy property in Spain? 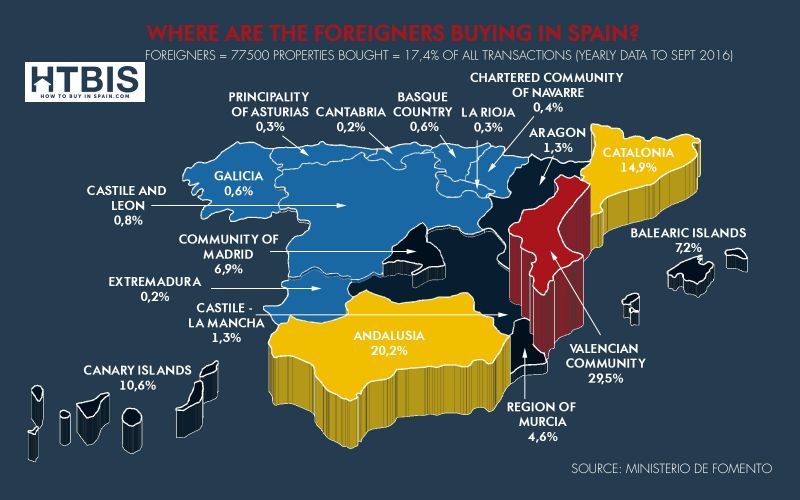 2019: Where do foreigners buy property in Spain?

We know that 16,209 Spanish homes were bought by foreign buyers in the second quarter of 2019, but where do they buy?

This map below from the Spanish Association of Land Registrars helps answer that question.

The map shows the percentage of sales in each province that involved a foreign buyer. The higher the market share of foreign buyers, the darker the red.

The market with the highest proportion of property buyers from abroad was Alicante province in the Valencia Region, home to the Costa Blanca, where 41.81% of home sales in Q2 involved a foreign buyer.

In many provinces in the north and west of Spain, foreign buyers are almost insignificant in the market, especially in Galicia where they are less than 1% of the market in all four provinces.

Generally speaking, European buyers led by the British, including second home buyers and lifestyle / weather migrants buy on the coast and islands where provinces are coloured orange and red, economic migrants from North Africa buy in the northeast and cities where provinces are dark yellow, and hardly anybody from abroad buys in the many interior and northern provinces coloured light yellow.

So what do these percentages mean in terms of the number of homes acquired by foreign buyers in each autonomous region and province in Q2? The registrars don't publish sales by area, but I've managed to estimate the numbers by cross referencing the figures they do publish to arrive at the following estimates, which I believe are accurate.

Only provinces with 100 or more foreign buyers in the period