Settling in to and understanding Spanish culture and lifestyle

To help expats understand and integrate into Spain's rich culture, we explore the country's customs and traditions, lifestyle and language - and pass on some helpful cultural dos and don'ts.

Run the history of Spain through your hands and you'll find yourself unspooling centuries of trade, exploration, conquest and empire, and the ebb and flow of peoples from near and far. And it's everywhere: in the plazas and gardens, the mosques and cathedrals, and in village streets and squares. You can hear it, dance it, dine on it, and you'll definitely speak it.

The story of Europe is of kingdoms mighty and small, shifting borders and some very debatable lands, most of which eventually coalesced into the modern nation states we know today.
The unity that we call Spain came into being in 1492 when the expulsion of the Moors ended eight centuries of Islamic caliphates in Spain. But traces of old kingdoms visibly and audibly remain in today's regional borders and languages.
There are four officially recognised languages in Spain, a number of dialects, and a strong sense of regional identity and autonomy. This proves that more than one culture has had its say in the formation of the country and that history rarely draws a neat line under the past – witness the 2017 referendum on Catalonian independence and the still open wound of the civil war.

Barcelona, Catalonia is the centre of a controversial political scene in Spain

Expats settling into Spain today are also settling into its past, and a grounding in the regional and national histories goes a long way to living in, rather than alongside, the country's lifestyle and culture. You may feel more like a tourist than a resident at first, but it won't be long before you're fluent in both culture and language.

Settling in the easy way

Few expats would deny that it's a bewildering experience, leaving one country and setting up home in another. Happily, most expats in Spain report as smooth and affirming a transition as they could wish; 87 percent of expats surveyed for the 2018 Internations Expat Insider report say local populations are friendly, and almost three quarters settled in easily with plenty of opportunities to make friends. Families with small children are quickly swept up in the community spirit. 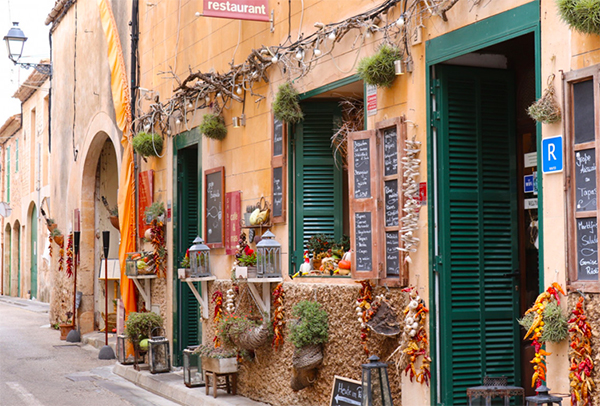 Spanish life is lived very much on the outside and it can be a challenge not to join in. From passing the time of day with locals to kitting out the kids for the fiesta, expats are constantly interacting with the community, and the community is generally very much in favour of having them there.

The key to settling in isn't just a question of joining in and speaking the language, though the quicker you learn Spanish the easier life will be. It's also about understanding and accepting the cultural and lifestyle differences that make expat life so enriching and, at times, so perplexing.

Mallorca is another typical place ex-pats buy property in Spain
Perhaps the most important change is to the clock, not just resetting your watch to Central European Time but adjusting to a much slower pace of life – fine when it comes to those long, languid afternoons on the terrace, less appealing when it comes to encounters with Spanish bureaucracy.

In fairness, red tape anywhere can appear opaque, but few expats look with much fondness on Spain's. Your routine trip to the bank or ayuntamiento can swallow up a whole morning and you may not come away with what you want or need. The official you've queued to see may appear indifferent to your assiduously assembled portfolio of documents or worse, inexplicably bent on frustrating you.

Indifferent, possibly; malicious, no. Spanish service culture is still relatively young, which may explain why the office of gestor, a paid intermediary, has few equivalents elsewhere. Expats near you will usually be able to recommend one. It's also worth remembering that the slower pace of life is one of the many positives cited by expats in Spain.

Assertiveness helps, and not just in that daunting interface with bureaucracy. Spaniards come straight to the point, usually with a startlingly abrupt "¡Dígame!". Steel yourself, swallow those reflexive, deferential would-you-minds and thank-yous, turn up the volume and be direct. Nobody will turn a hair, and you'll get served much more quickly.

Understanding the why of Spanish culture is as important as the where, when and how. Not everything will appeal – many expats find bullfighting and bull-running at best incomprehensible and at worst deeply troubling – and knowing the history of either probably won't make them any more palatable, but it does help to accept them as part of the living story of your new home.

Explore and embrace it at all levels, from a visit to Córdoba's Mezquita to the local village saint day. At either end of these two scales you'll start to build a feel for how Spain has been shaped, built and influenced over twelve centuries, and better still, your curiosity will gratify your new compatriots who'll be only too pleased to fill in the details.